There was something really nostalgic about the last possession on Thursday night in Oakland.

Raiders 26, Chargers 24. 1:02 to go. Philip Rivers taking the field trying to lead a game-stealing drive for Los Angeles in a game both teams really need to stay afloat in the AFC playoff race.

A lot was made about Thursday being the last primetime game ever to be played in the Oakland Coliseum, and the Black Hole certainly treated it as such when the game was on the line.

This was the 120th meeting between the Chargers and Raiders, a rivalry that dates back to before either of them were even in the NFL. Most fans on both sides would tell you the two games against the other are the ones they circle when the schedules come out.

And for one last time, Oakland fans gathered in the old cathedral to watch the Chargers and Raiders. It came down to one possession, and the defense forced Rivers into seven consecutive incompletions with an interception at the end to clinch the win. There is plenty to say about how fractured the relationship is between Oakland fans and the Raiders through decades of re-alignment and broken promises. The tone of the conversation will change as the season winds down and the true reality of what’s about to happen fades in.

Yes, they’re really moving. This is all about to end. The doors on the NFL’s most unique venue will close for good. There won’t be another season to look forward to or another afternoon tailgating outside the Coliseum for Oakland’s football fans when this is all over.

But in a one minute vacuum, none of it mattered. The exisential circumstances of the franchise were the furthest thing from anyone’s minds.

This was just the Chargers and the Raiders in the Coliseum, and the home team getting the better of the old enemy behind a ferocious crowd.

Not the way it will continue to be, but definitely the way it always has been.

Jon Gruden knew this wasn’t a normal win. Not in this setting. Not against those guys. Not with what was at stake.

You could see this one had a little extra juice by how he handled his post-game celebration with the Raider die-hards.

Derek Carr knew this wasn’t a regular win. Not in this setting. Not against those guys. Not with what was at stake.

I get emotional talking about it because I’ve been through so many highs and lows in this place,” he told Erin Andrews in his postgame interview on FOX. “I’ve been in the league six years. We’ve made the playoffs once, and I was hurt.

It’s not hard to see why Carr reacted the way he did. “This place” and the way it exploded when Karl Joseph picked off Rivers’ last-gasp pass is the perfect embodiment of what these 2019 Raiders are.

When Gruden was hired as head coach, at best it was seen as a questionable move. Public opinion went completely in the submarine when the team dealt Khalil Mack and Amari Cooper on the way to a 4-12 campaign in year one.

Suddenly, the plan nobody but the Raiders could see is showing some signs of life. The team’s top draft pick last year was Clelin Ferrell, and he has been in on the defensive turnaround. Josh Jacobs—the running back the team used the first-round pick from the Khalil Mack trade to draft—has been a revelation.

It’s only fitting both played huge roles in the win over the Chargers, as Ferrell had 2.5 sacks on Rivers and Jacobs scored the game-winning touchdown. 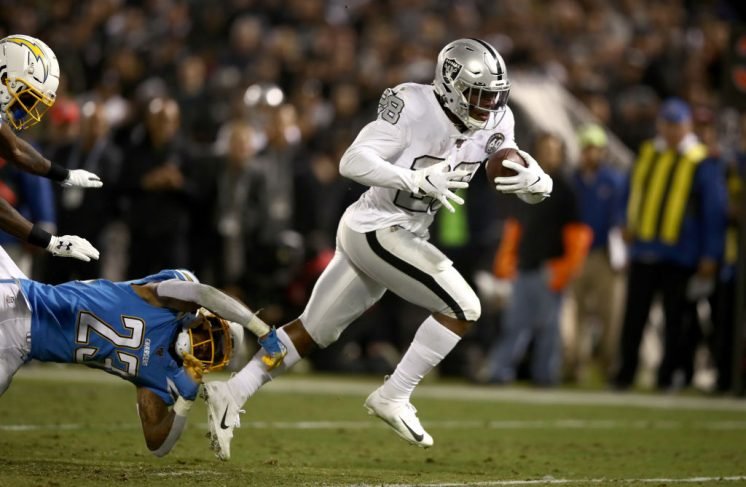 The Raiders are 5-4 and squarely in the thick of the playoff race. They’re only one game behind Patrick Mahomes and the mighty Chiefs for first place in the AFC West.

It was supposed to be a year for making small improvements and acquiring some more draft capital as the franchise positioned itself to at least be competitive for the first season in Las Vegas.

Now the attention has shifted to making one final run for the Oakland faithful.

That clock is running out on that faithful. It could’ve struck midnight tonight with a loss, but the Raiders weren’t about to let Vegas time start just yet.  Not in this setting. Not against those guys. Not with what was at stake.

Next up will be the winless Cincinnati Bengals. The 1-7 New York Jets will follow. There are no guarantees in this league, but the Raiders will be heavy favorites to improve to 7-4. They’re certainly playing like a team who should be. On deck after the Bengals and Jets will be a December showdown with the Chiefs that could be for first place in the division.

From there, who knows? This is a franchise with just a single winning season since 2002. They have played in one playoff game in that time frame, and lost it. They haven’t hosted a postseason contest in equally as long.

Anything this team can accomplish is a bonus, especially in what was supposed to be another year in the rebuilding process. There are no small steps forward when you’re escaping the doldrums of your longest (and worst) stretch of futility in team history. The Raiders have been around for 60 years, and until this current stretch, they had never gone more than six without winning a playoff game. They’ll triple that if they haven’t snapped the streak by the end of 2020. Could these Raiders do it? Can they give the Coliseum the gift of one more magical night by winning the division and hosting a postseason game? Can Carr do what his body wouldn’t allow him to three years ago and play on the biggest stage?

We don’t have answers yet, and that’s the best the Raiders could’ve hoped for on Thursday. The answers would have almost surely been a flat “No” without a win.

Right now, the U-Haul trucks set to move the franchise to a shiny new stadium are an afterthought. The move to Nevada is on the other side of this season. The fact is they are still in Oakland, and they are maybe the biggest surprise story in football. The fans and players will say their goodbyes in December (or January) and pass judgment on Las Vegas in the years to follow.

But now over .500 off an emotional primetime win, both groups have bigger fish to fry. Chasing a playoff spot is at the top of the list.

It didn’t look like that would be the case when Los Angeles took a 24-20 lead with 4:02 left. It was fair to wonder if the half-century-old rival from down I-5 had turned out the lights on meaningful football in Oakland. But Carr, Gruden, Jacobs, and the Raiders’ defense weren’t going to let it end like that.

Not in this setting. Not against those guys. Not with what was at stake.