In preparation for the start of the hundredth NFL season, we’ve collated some of the best places to keep an eye out for everything and anything NFL. We’ve selected 5 of the biggest places which bring you tailored NFL coverage for the UK fan. Saying this, and whilst these places are great, I highly recommend you venture outside this list. There are so many more accounts, shows and sites for you to follow ranging from giveaways or team specific coverage.

The first, and arguably the best, place to follow your love for American Football is “NFL UK” on all forms of social media. Take your pick of their Twitter, Instagram and Facebook (or all of them) to stay updated with news, clips and any events they may put on during the season. In many ways, NFL UK can be your one-stop-shop for everything American football, but especially UK based content.

NFL on the BBC

The BBC run two NFL shows throughout the season with the ever charismatic and hilarious duo of Jason Bell and Osi Umenyiora backed up by the reliable Mark Chapman. The first of the two shows, appropriately named “The NFL Show”, covers all the major stories shaping the NFL that week and give predictions for the upcoming week. This airs at the convenient time of 00:55 on Sunday mornings but is available on iPlayer. Secondly, the BBC air a highlight show of the previous week’s games at 23:15 on a Tuesday night.

The Gridiron Magazine is an annual subscription service that offers you NFL news and more in-depth analysis then typically found online. You can subscribe for a digital or paper magazine which gives you eight issues over the course of the season alongside access to their archive of previous editions. For those of you who enjoy a read, Gridiron is the best place for UK NFL fans.

If you already own Sky Sports then you’re sorted for coverage of the NFL 100 season. Sky show up to six live games each week, hosted by Neil Reynolds and supported by Shuan Gayle and Jeff Reinebold as regular co-hosts. Or, if you would rather, Sky also show NFL Redzone presented by Scott Hanson in which every touchdown is shown as they hop between games during a 7 hour, commercial free programme. Aside from live football, Neil Reynolds also hosts Inside the Huddle midweek alongside guests in which they talk through the big moments in the NFL that week.

Finally, and something for the audio listeners, is the Around the NFL podcast. Whilst I’ve been trying to pick things specifically tailored to the UK fan, I had to add “The Around the NFL” podcast to this list. In terms of UK fans, “The Around the NFL” podcast works closely with Sky, providing their insights and opinions during breaks in live matches, and are heading to the UK once again this year to attend the Panther v Buccaneers game. Almost inevitably, the Around the NFL ‘heroes’ will be putting on a live show too, but that is yet to be announced. In terms of the podcast itself, for me at least, this is the most informative and humorous NFL podcast for any fan. 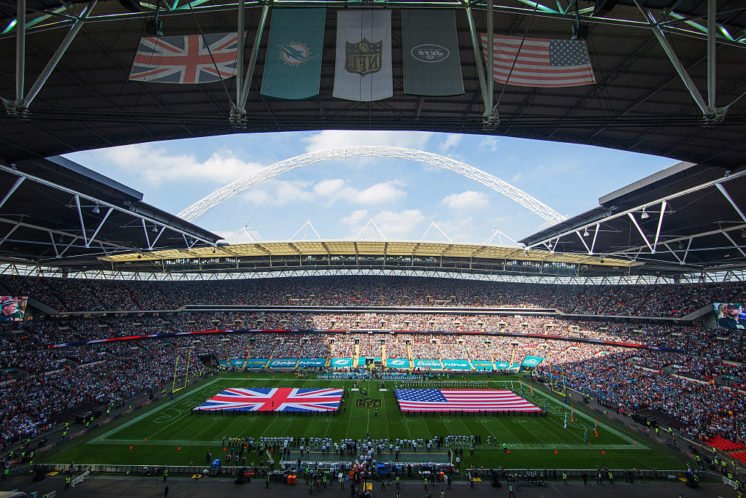