In case you don’t have any social media, it has now been confirmed that the Oakland Raiders will be the focus of HBO’s latest 2019 season of Hard Knocks.

If you aren’t a Hard Knocks fan already, this year could be a great year to change that. The show follows the late offseason of an NFL team, with unmatched access to the players, coaches and organisation as a whole – both on and off the field.

The show will air in August, and here we’re going to take a look at who and what you should keep your eyes out for in this series. 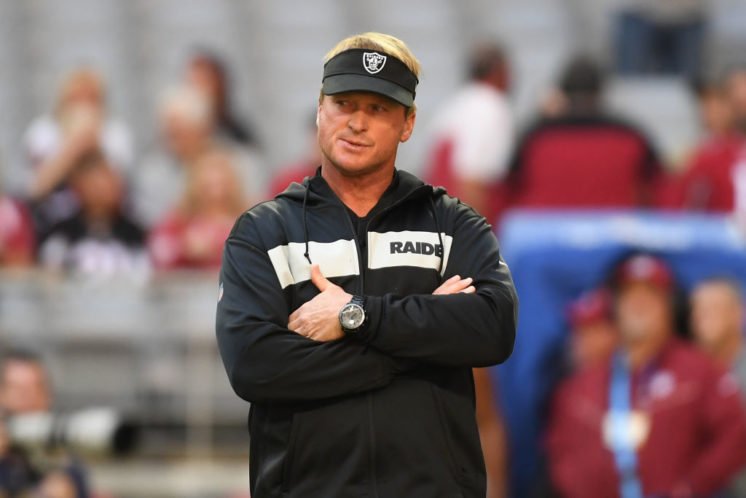 First on the agenda is a look into the coaching style of Jon Gruden – potentially the most old-school coach in the NFL today. Not just because he’s older than the likes of Sean McVay, but because he spent nine long seasons in the broadcasting role and has now returned to coaching with much of his style from his previous work intact. ‘Chucky’ had his first stint as the Raiders HC from 1998 to 2001 and led a brilliant team that took the tuck rule to stop. After he left, the only team that could slow this brilliant Oakland side arrived in the form of – guess who – Jon Gruden… who beat them in the Super Bowl to conclude the very first season in Tampa Bay, after leaving. All of this, as well as his comfortability working on the TV side of things, and his loud and blunt coaching style will make for plenty of screen time in this season. 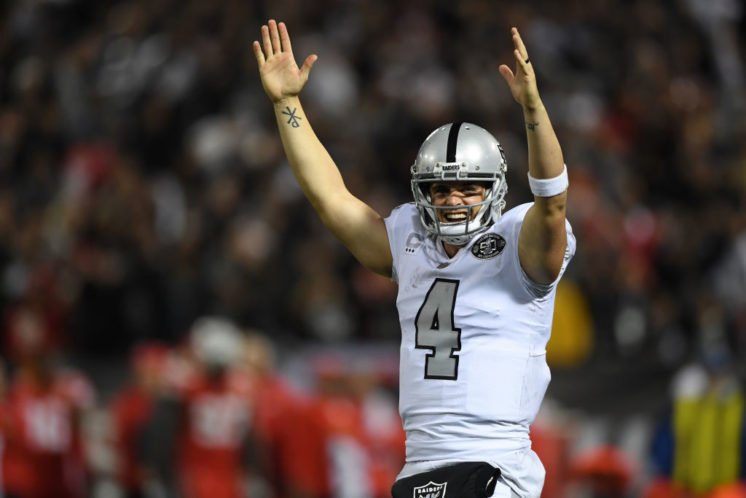 The Raiders’ franchise quarterback is one of the most interesting players in the entire NFL for this season, let alone Oakland. Just two years ago DC4 was a legitimate MVP candidate, before breaking his leg against the Indianapolis Colts, after securing the Silver and Black their first playoff-berth for 15 seasons. This terrible misfortune means that Carr still has not had a taste of the postseason for himself, but he is planning on it. It became increasingly apparent this summer that he is annoyed that people have been so dismissive of his worth as the franchise QB, with rumours that the Raiders wanted to draft a QB rampant since February.

I think that not only has Gruden proven that he believes in #4, he has vastly improved the team around him on both sides of the ball. We’ll speak more about specific upgrades, now, starting with the best short-term addition of the bunch.

Not everyone, be it a fantasy football player or someone who frequently watches the NFL, is a big fan of Derek Carr – but I know someone who is. Antonio Brown is just about the biggest Carr fan I’ve seen. Ever since the clip you may have seen of AB pleading to his Pro Bowl coach that he wanted to get out on the field with the Raiders quarterback, it is clear he has a lot of respect for the 28-year-old signal-caller. Having spent so many years with Big Ben, it has been said for so long that their connection and rapport is what made the Steelers passing game so dominant. One of the main stories for this team is how Brown will fit in, and his relationship with the rest of the locker room. On the field, the Raiders new superstar receiver can be expected to go and dominate as usual – but the concerns come off it; including in the changing room. 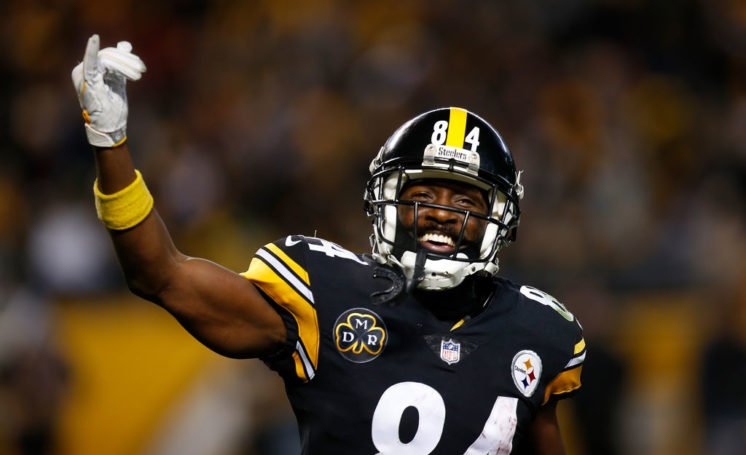 If you follow his Instagram, you’ll know that the ex-Pittsburgh star has been assuring his followers that he has now turned over a new leaf with his previous divisional nemesis in fellow offseason acquisition Vontaze Burfict. New leaves or not, the latest man to wear the silver number 84 is known to be a character in the locker room and he will be one to watch – inevitably, HBO will be making it easy enough to do so in the show.

Also, if you haven’t already, go and find his Mic’d Up minicamp on YouTube. It’s great to see the relationship with Gruden and DC4 that he is growing, and his route running looks as crisp – and fast – as ever, too.

The other free agency signings and trade additions

As well as the elite wide receiver in AB, and the notorious linebacker in Burfict, there are multiple other additions who I am excited to see in both the season and Hard Knocks. For a start, I think that another middle linebacker could usurp the more often discussed ex-Bengal as the best addition at the position this offseason, namely Brandon Marshall.

My personal Hard Knocks highlights are Tyrell Williams, Trent Brown, and LaMarcus Joyner. Williams is going to be paired with AB and underrated deep-ball throwing Derek Carr in a much-improved passing offense, fresh from divisional rivals in the form of the Los Angeles Chargers, making him an interesting addition to say the least. 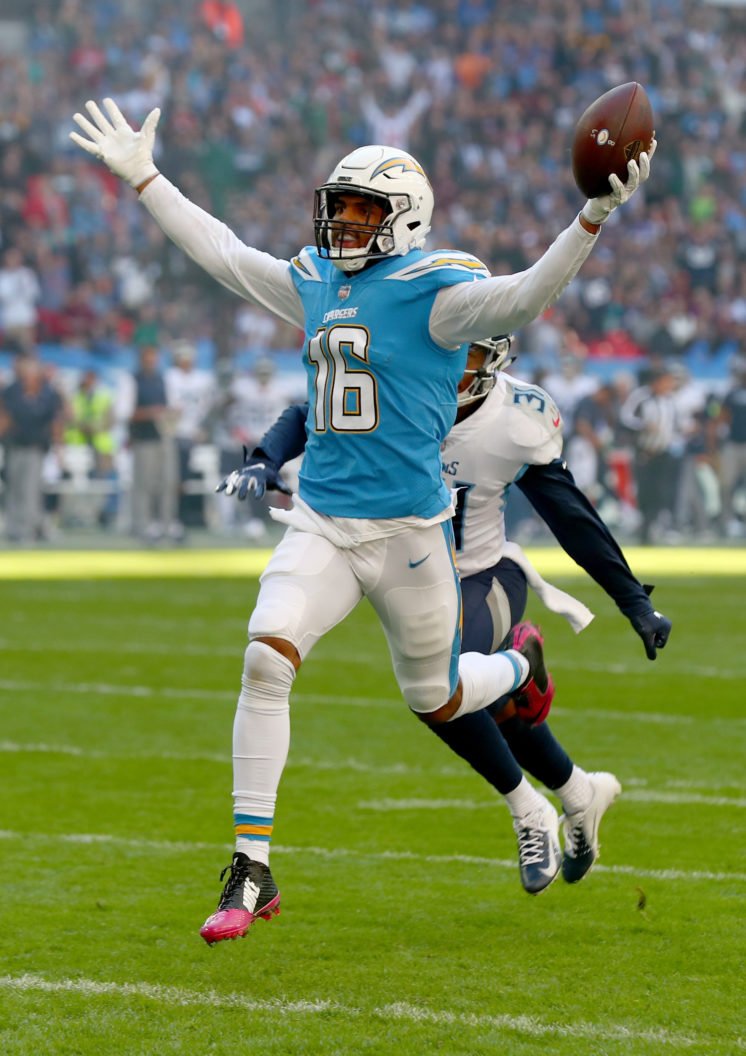 Trent Brown is another person who you can expect to see bouncing off his namesake, although not in the receiver room. Another Instagram sourced finding of the offseason is that Antonio and Trent were working out together, and the ex-Patriot left tackle, fresh off the back of his first Super Bowl ring, secured a big contract with the Raiders. Big things are surely expected, after last year’s first round pick Kolton Miller disappointed in his rookie year. There are plenty of people who are doubting Brown, and the new contract, when you’re reminded of his incredibly important position in the team – pivotal in protecting DC4, it is clear that his transition from the Patriots to the Raiders could be a potential key storyline.

Finally, of my three favourite additions, and he by no means is the least exciting, is safety LaMarcus Joyner, previously of the Rams. The defense of the Raiders, as we will discuss shortly, is very different from last season, and Joyner is one of the most impactful of the changes that they have made. Defensive co-ordinator Paul Guenther now has three talented safeties to play with, Joyner serving as a rangy over-the-top free safety to go alongside the more aggressive other options. 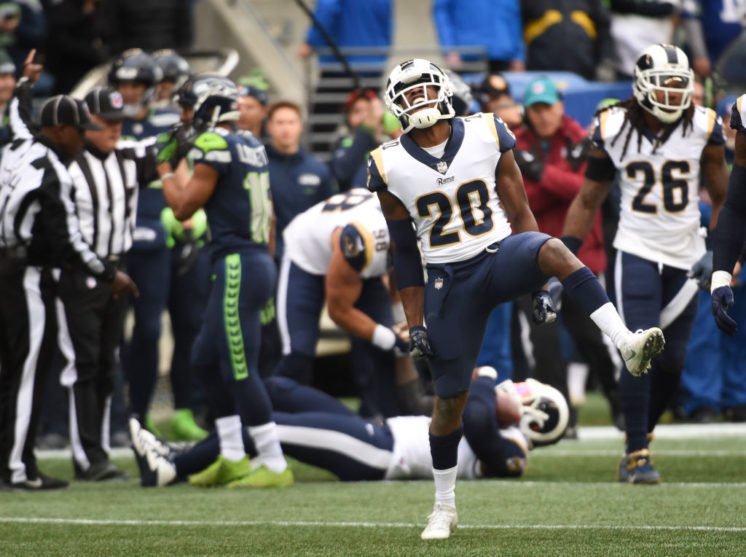 The last signing that I think needs to be mentioned, half for his on-field ability, and half for the locker room implication, is Richie Incognito. The veteran guard most recently padded up for the Buffalo Bills, before taking a year out. His return is undoubtedly one that could be massive for the Raiders, who dealt Kelechi Osemele to the Jets this spring. The early indication is that Gruden brought in the once All-Pro Incognito with the hope of him returning to that old form, but many observers have noted that there may be some potential friction in the locker room (as if there wouldn’t have been already) and if that begins to happen, you can expect to see plenty of it on HBO’s coverage.

If you haven’t seen Hard Knocks before, you may not be aware that there is a consistent emphasis on the rookie(s) of the team – and the Raiders have plenty of those. Having made three picks in the first round alone, the intake of Mike Mayock’s first ever draft as a GM will be a definite focus. 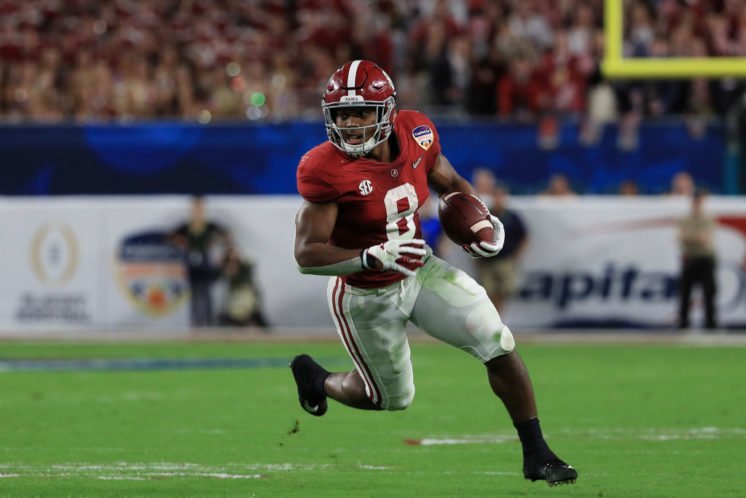 The three additions are all individually exciting for their own reasons. First and foremost, Alabama running back Joshua Jacobs has a remarkable story that will surely be a main storyline this season. Marshawn Lynch’s successor, taken with the 24th overall pick, has an incredible history – a tale that spans from being homeless to walking onto the stage in Tennessee in an Oakland Raiders hat, a first-round star. I won’t tell the whole story, as I’m sure HBO will, but his talent on the field is just as exciting, and it will be awesome to see him get to work alongside the returning group of Jalen Richard, Doug Martin and DeAndre Washington. Having a true three-down back would be immeasurably beneficial to an offense that struggled last year.

As exciting as both Jacobs’ ability and story are, the biggest rookie headline on the field is firmly fixed on the 4th overall pick of the draft, Clelin Ferrell. The defensive end was the first of many Clemson alum who traded orange and white for silver and black this summer. He has been called by many fans and experts alike as a reach in the draft, and many suggest that he wasn’t the best player at his position available when he was selected. The widespread questioning of this choice will fuel an interesting story, and that will be magnified by the fact that seemingly Ferrell is the first man to be assigned with the job of trying to replace Khalil Mack. 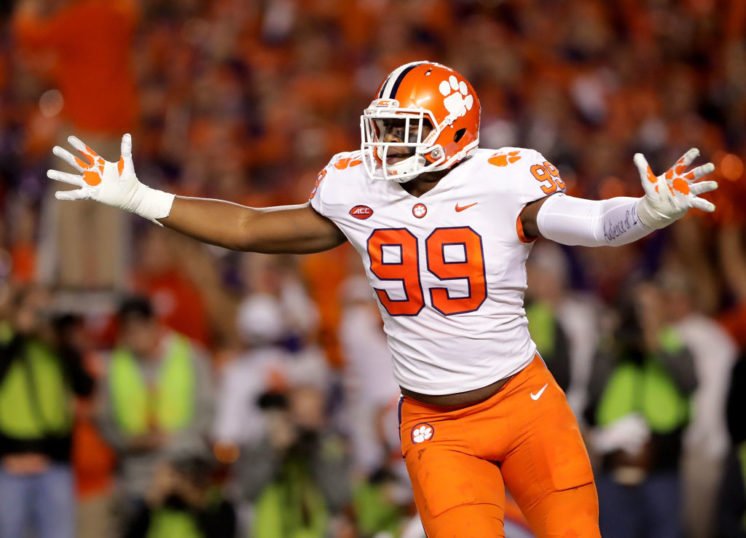 The final pick of the first round, the 27th overall, Johnathan Abram, a safety out of Mississippi State will be less of a storyline in himself, but he is one of the most important players on that defense going into the future. He is an incredibly versatile defender, in that he isn’t afraid to play much more aggressively than Joyner, more akin to the final of the three top safeties in Oakland – and the only one of them who was here last year – Karl Joseph. This trio has one rangy safety on top, one aggressive box-filling safety, and then Joseph who is a comfortable middle ground. The upgrades at the position are of utmost importance to a team that struggled against both the pass and the run last year.

Other notable rookies include slot receiver Hunter Renfrow, 2nd-round pick Trayvon Mullen at cornerback, and an underrated selection, but who Gruden and Mayock love, in the shape of defensive end ‘Mad’ Maxx Crosby. I genuinely believe that Maxx Crosby will be starting at DE opposite fellow rookie Ferrell.

My personal wildcard from the rookies this year is tight end Foster Moreau, who has a real chance at fighting for first-year game time at the position despite having been taken late in the 4th round. I expect to see the TE depth chart play itself out on Hard Knocks, especially after now-departed Jared Cook had such a good year with the team last season. 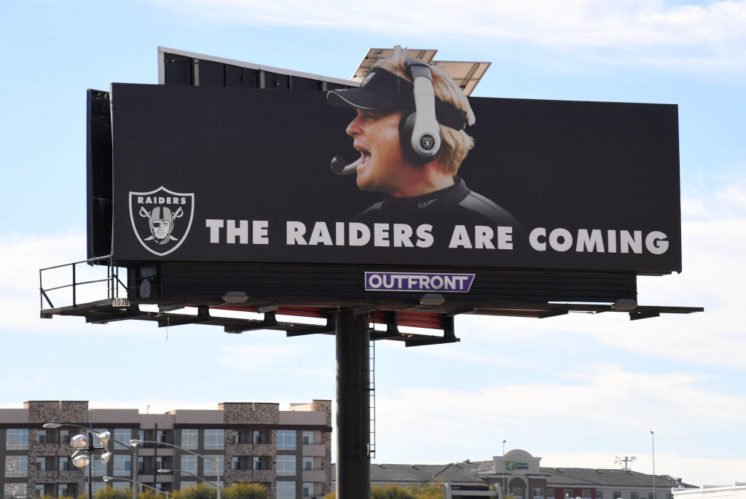 The single (literally only) reason that I see people questioning why the Raiders are on Hard Knocks this year is simply because of the assertion that next year will be more unique due to the fact that they are moving into their new stadium. However, this year they have all of the awesome players listed above, freshly added to the team, and I think they can still feature the narrative factor of the relocation prominently. There will definitely be talk of the new stadium, and potentially some cool insight into the project itself, hopefully even some updates on the work being done in Vegas. This is a cool subtext to the season, as it should be the last one spent in Oakland.

As if the offseason wasn’t enough, the Raiders have quite the preseason lined up. First facing the Super Bowl contending LA Rams in their final preseason game in Oakland, followed by a road meeting with Kyler Murray and the new-look Cardinals. The last two weeks of August will be split between facing the Packers in Canada (!) and a trip to Seattle to play the side who embarrassed them in London last season, the Seahawks. The one silver lining, in theory, is that this is the type of preseason that it is going to take if the Raiders have any hope in a good season, because they have an objectively awful schedule. I would argue with anyone who disagrees it is the hardest in the league; and the start is rough.

They need to be prepared – and we get to watch them in that process. I can’t wait.

Last, but not least.

We get to watch Jon Gruden trying to teach Nathan Peterman how to not suck. 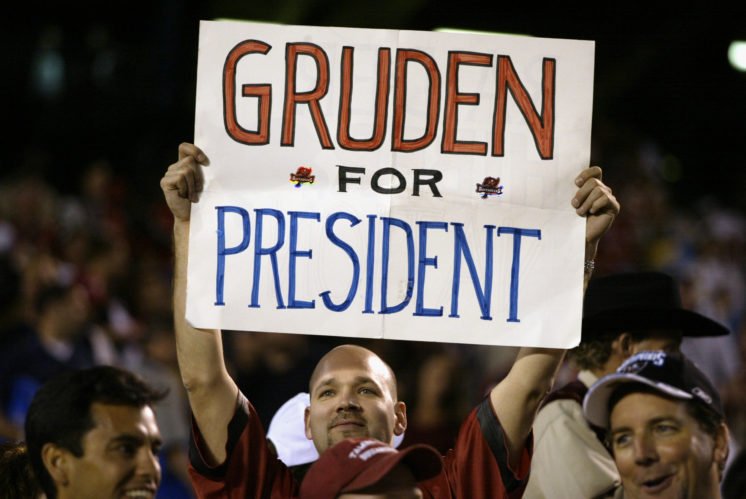