James White took the toss from Tom Brady with a lane in front of him. He took the space, and scored the only overtime touchdown in Super Bowl history a few seconds later.

It completed the greatest comeback in NFL history, and gave the New England Patriots their fifth Super Bowl title with a 34-28 win over the Atlanta Falcons. The other side of the coin was Jake Matthews, Atlanta’s left tackle who committed two crucial holding penalties in the second half as his team’s 25-point lead wilted away.

The man who scored the opening touchdown of that game was Devonta Freeman, who put the Falcons up 7-0 in the second quarter. His missed chip block also allowed Dont’a Hightower to force a fumble on Matt Ryan with the Patriots down 28-12 in the fourth quarter, opening the door for the New England comeback.

But other than playing key roles on opposite sides of arguably the greatest game in NFL history, White, Matthews, and Freeman have something else in common. All three of them were selected in the 2014 NFL Draft. 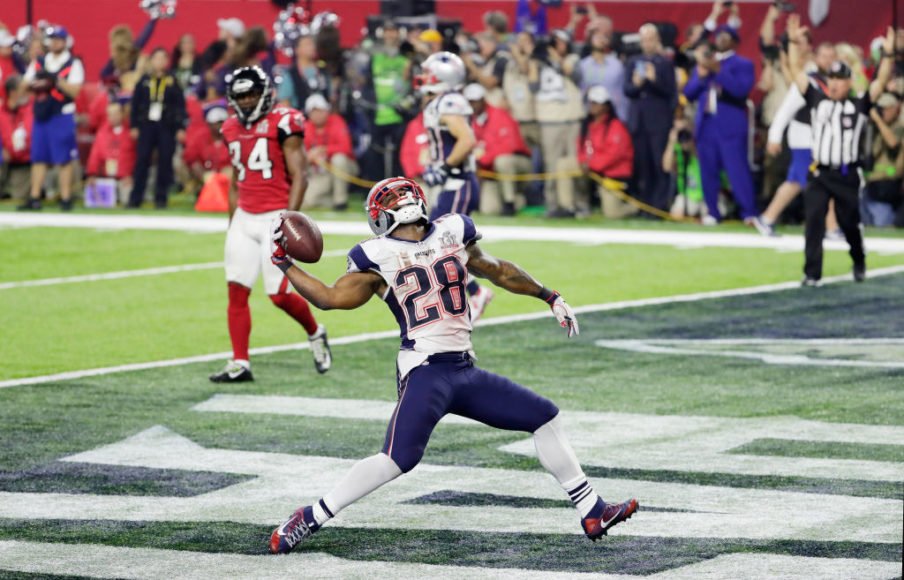 The 2014 NFL Draft class has defined the recent NFL. From a player like Matthews who was selected in the top ten all the way down to undrafted talent, the rookies who entered the league five years ago have contributed more to this league than any class in recent memory.

Almost all of the most iconic moments in the league over the last five years have had a member of the 2014 draft class squarely in the middle of the action. Super Bowls, playoff games, ground-breakers, and even fights between teammates were all set into motion across the days of the 2014 NFL Draft.

It was one of the most unique draft classes in NFL history, and its fingerprints have been all over the league for the last half-decade.

White’s game-winning touchdown in Super Bowl LI was the first of three consecutive trips to the big game for the Patriots. The only reason they didn’t come out of it with a three-peat was the Philadelphia Eagles, who beat New England 41-33 in another legendary Super Bowl one year later.

The Philly Special has almost taken on a life of its own in the 14 months since it happened. It was one of the most high-risk, high-reward play calls in NFL history, and the reward was Nick Foles becoming the first quarterback in Super Bowl history to throw and catch a touchdown pass. It was the key point in the first Lombardi Trophy in Eagles history, and a life-changing night for generations of Philadelphians. The man who threw the touchdown pass to Foles was Trey Burton, an undrafted tight end from the 2014 class. 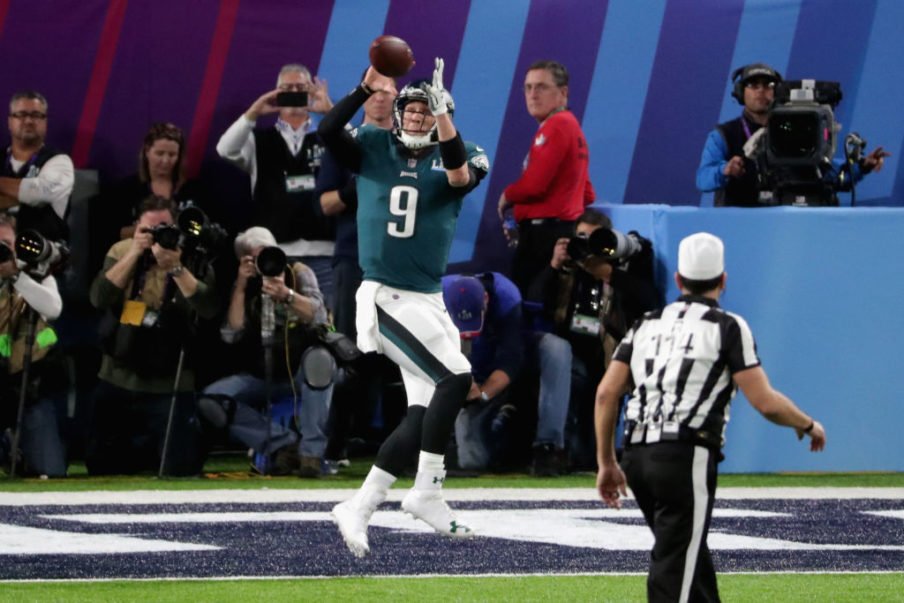 One year later Burton was on the losing end of a tight playoff game involving the Eagles when his Chicago Bears fell 16-15 against the defending world champs on wild card weekend. The game was decided on a last-second missed field goal by Cody Parkey, another undrafted member of the 2014 class.

Speaking of undrafted players in 2014, the man responsible for the most clutch defensive play in Super Bowl history was one of them. Before Malcolm Butler made a game-saving interception in the end zone during the waning moments of Super Bowl XLIX to deny the Seattle Seahawks a dynasty, he sat through 256 draft picks without hearing his name called in 2014.

Just like Burton, Butler went from a 2014 UDFA to a Super Bowl hero. 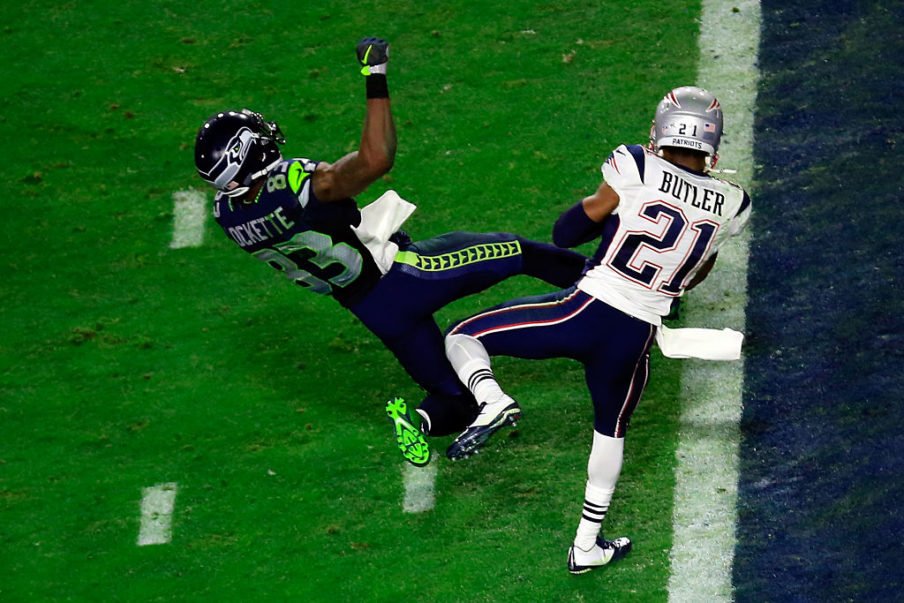 New England’s third of the aforementioned three consecutive AFC titles never would have happened without an unfortunate intervention from a member of the 2014 draft class. Kansas City’s first-round selection was Dee Ford, who was on the field trying to stop the Patriots with the Chiefs clinging to a 28-24 lead in the 2019 AFC Championship Game.

Charvarius Ward’s interception should have booked Kansas City’s first Super Bowl appearance in almost half a century, but Ford was offsides, giving New England new life they would take advantage of.

The fate of Tom Brady’s quest for a sixth Super Bowl, the Rams becoming the only team in Super Bowl history to fail to score a touchdown, and maybe Kansas City’s championship drought could all look drastically different without Ford’s penalty.

Aaron Rodgers has Super Bowl experience of his own, but he was already well established as an elite quarterback by 2014. But two of the most famous moments in his career never would have been possible without players the Packers drafted in 2014.

Jeff Janis was selected in the seventh round in 2014 with the 236th selection. Most people have never heard of the place he played college football at, Saginaw Valley State in Saginaw, Michigan. But he found himself on the receiving end of an iconic Hail Mary in the 2016 playoffs, when he caught a heave from Rodgers as time expired to keep Green Bay’s season alive.

It prompted one of the most quotable lines of commentary in recent NFL history, when Cris Collinsworth just screamed “OH STOP IT!” at the sheer ridiculousness of what Rodgers had just pulled off. It was the second time in just over a month Rodgers had completed a Hail Mary as time expired. The first one came in Detroit, where Rodgers fired the ball 64 yards on an untimed down to defeat the Lions. It was caught by Richard Rodgers, a third-round pick in 2014. 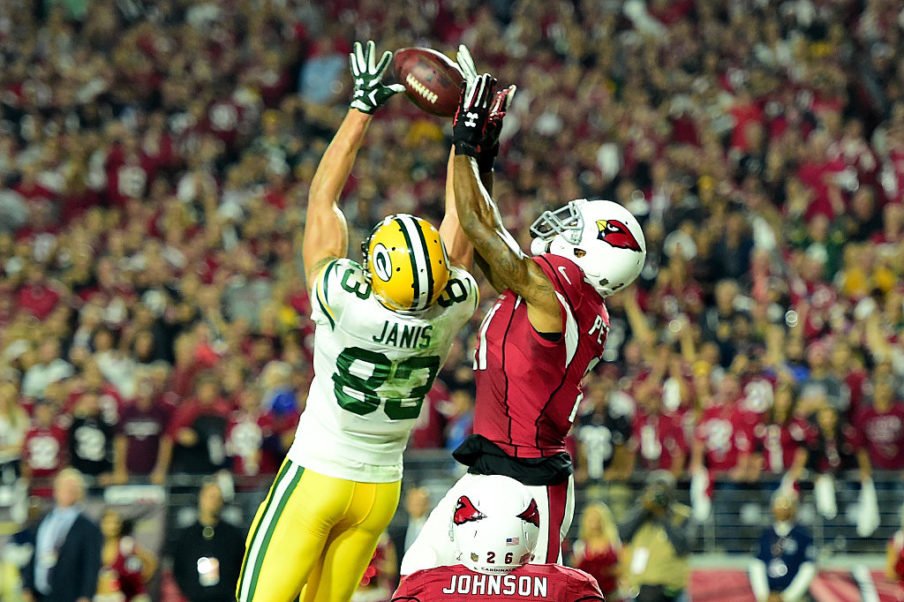 Off the field, two of the most jaw-dropping trades in NFL history were both centered around elite talents from the 2014 Draft. In the space of about half an hour of real time, the Raiders and Giants drafted franchise-changing players in Khalil Mack and Odell Beckham Jr. respectively.

But the Beckham Jr. trade might never have happened if his college teammate and good friend Jarvis Landry wasn’t already in Cleveland. Landry was a second-round pick in 2014, and it remains to be seen what he and Beckham Jr. can do together in Cleveland with Baker Mayfield.

While the Giants have let their quarterback slowly deteriorate and traded away his best weapon, the other tenant of MetLife Stadium hasn’t had a stable one at all. It’s been a revolving door of quarterbacks for the Jets in the last half-decade.

The first of those was Geno Smith, who went into the 2015 season looking to establish himself as the long-term man for the Jets after a disappointing 2014. He never got the chance though, because IK Enemkpali fractured his jaw in a locker room fight. The punch made Enemkpali the most notable sixth-round draft pick from 2014, but not in a good way.

It’s par for the AFC East course, really. The Patriots always seem to find a way to score great talent wherever they draft, and they got a Super Bowl MVP when they picked up an undrafted free agent. The Jets? Well, they drafted a man who knocked out their starting quarterback in training camp a month before the season. Not all franchises are created equal.

Perhaps nobody knows about this concept more than the Cincinnati Bengals, who hold the longest drought in the league without a playoff win. They had a golden chance to end that in January of 2016, when A.J. McCarron – their fifth-round pick from 2014 – stepped in for an injured Andy Dalton and had the Bengals up 16-15 late over the Pittsburgh Steelers despite a memorable touchdown catch from Steelers receiver (and 2014 fourth-rounder) Martavis Bryant.

Then Cincinnati’s second-round pick from 2014 undid all the good work done by the fifth-rounder. Jeremy Hill fumbled away a drive that could have iced a historic victory for the Bengals, giving the Steelers one more chance. As they usually do, things spiraled from there for Cincinnati. The chain reaction of events after Hill’s fumble included one of the most memorable and controversial hits in NFL history by Vontaze Burfict, a pair of 15-yard penalties on the Bengals, and more playoff heartbreak. 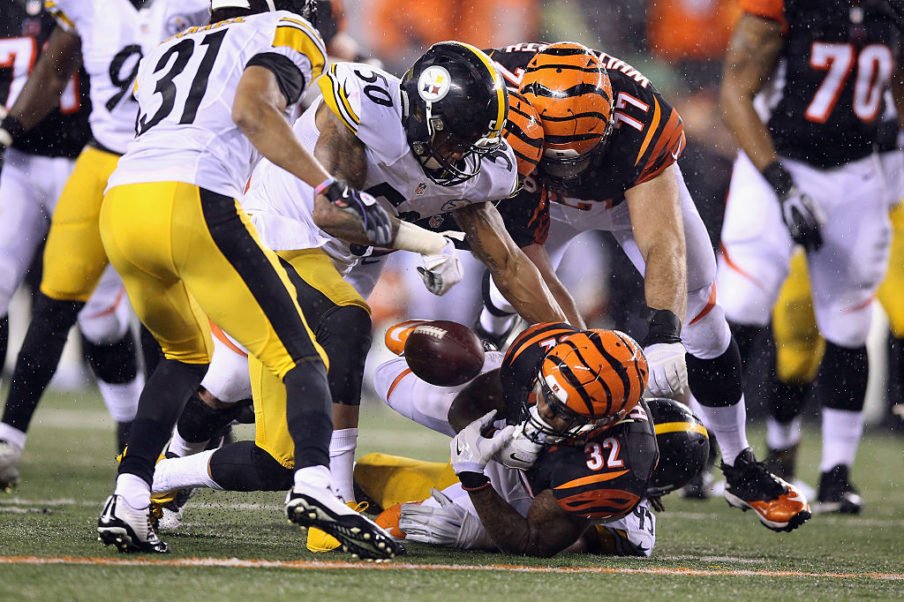 The deconstruction of those Pittsburgh Steelers has been slow but steady since that win in Cincinnati, with the crescendo coming recently with trades of Antonio Brown and Le’Veon Bell. The final game the “Killer Bs” of Ben, Bell, and Brown all played together in Pittsburgh was a 45-42 playoff loss in January 2018 to another “B” in Jacksonville quarterback Blake Bortles.

Bortles was the first quarterback selected in 2014, and has been one of the most polarizing players in the league ever since. His detractors will point to numerous underwhelming seasons, but his supporters can look at how he got the Jaguars to the AFC Championship Game in 2017 with a pair of playoff wins.

Those wins might never have came to be without the help of two other 2014 draft picks, Aaron Colvin and Telvin Smith. The former had the game-sealing interception in Jacksonville’s victory on wild card weekend over Buffalo, and the latter had a scoop-and-score in the 45-42 win over Pittsburgh.

And the list goes on. Aaron Donald was drafted in 2014, a superstar who was one of the early faces of the rebuild in Los Angeles that led to an NFC Championship. Teddy Bridgewater and Ryan Shazier, two players who seemingly had the world in front of them before horrific injuries cut both of them down. 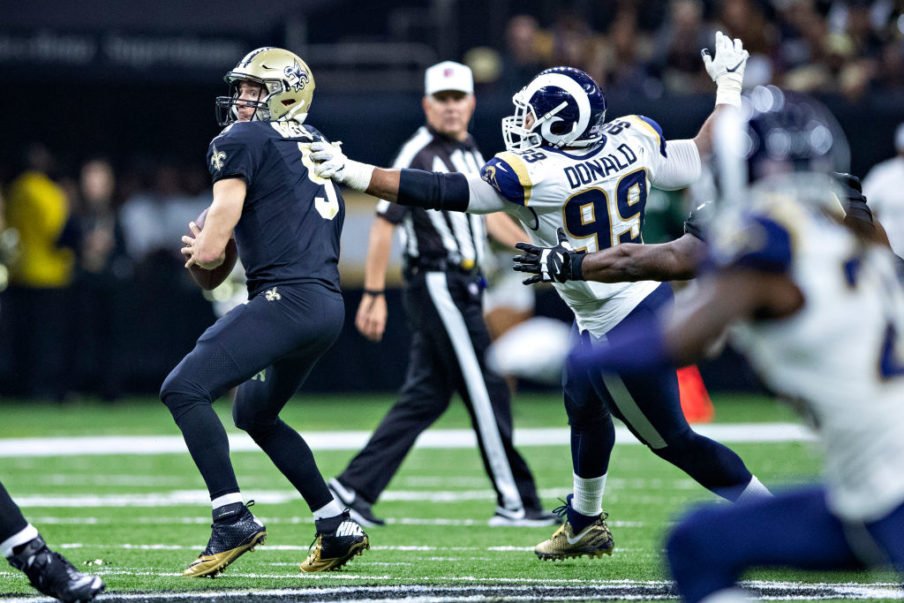 Michael Sam, who broke barriers by becoming the first openly gay player taken in an NFL Draft. Chris Borland, who brought more light to the ongoing fight the NFL has with concussions when he retired after his rookie season due to concerns about CTE. Both current starting quarterbacks for the Bay Area teams were second-round selections from 2014 in Derek Carr and Jimmy Garoppolo.

Kyle Van Noy emerged as a defensive standout in New England’s total shutdown of Jared Goff and the Rams in Super Bowl LIII. Andrew Norwell went from undrafted to the highest paid guard in the history of the league. Kony Ealy had an interception of Peyton Manning in Super Bowl 50 for the Panthers.

The Cowboys confirmed their commitment to building the ground game that would culminate in them drafting Ezekiel Elliot two years later when they took Zack Martin in 2014. Johnny Manziel, the man everyone assumed Jerry Jones wanted, went to the Browns a few picks later and became the epitome of pre-2018 Browns infamy. 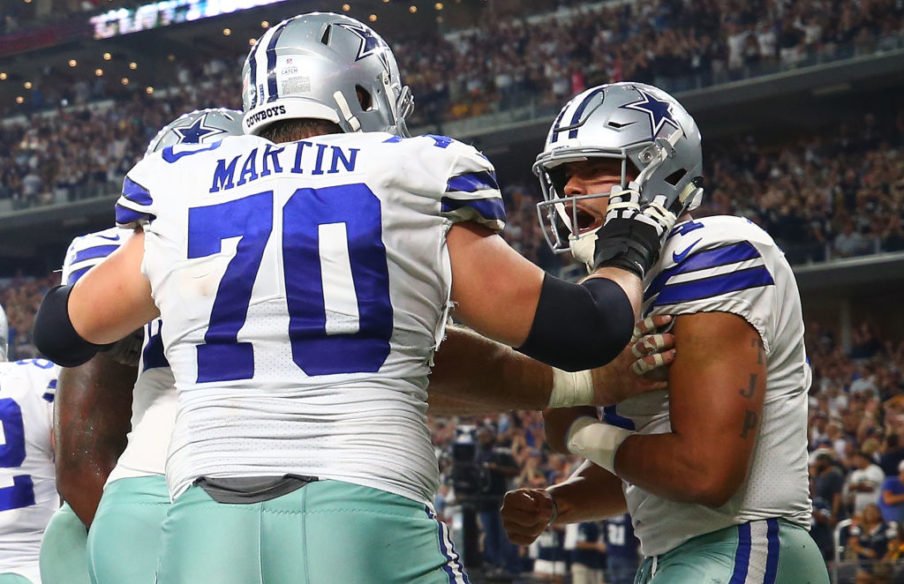 No matter what you think the defining moment of the NFL has been in the last five years, there’s a good chance a member of the 2014 draft class made it happen. The pass at the 1-yard line, 28-3, the Philly Special, Burfict’s hit, a pair of earth-shattering trades, and even a punch.

It’s only been half a decade since all these players joined the league. Many of them are still in the league, and will be for a long time to come. But even after the last member of the 2014 draft class retires, the moments they’ve made as a group in just these first five years will last forever.