All throughout the 2018 off-season, San Francisco 49ers fans were in dreamland. After finishing the previous season winning their last five games with all-star QB Jimmy Garoppolo under centre, the Niners were in prime position to progress and challenge for a play-off spot.

If Niner fans were in dreamland in the 2018 off-season, well the regular season was a raging nightmare filled with off the field drama, heartbreaking losses and many more worst-case scenarios. 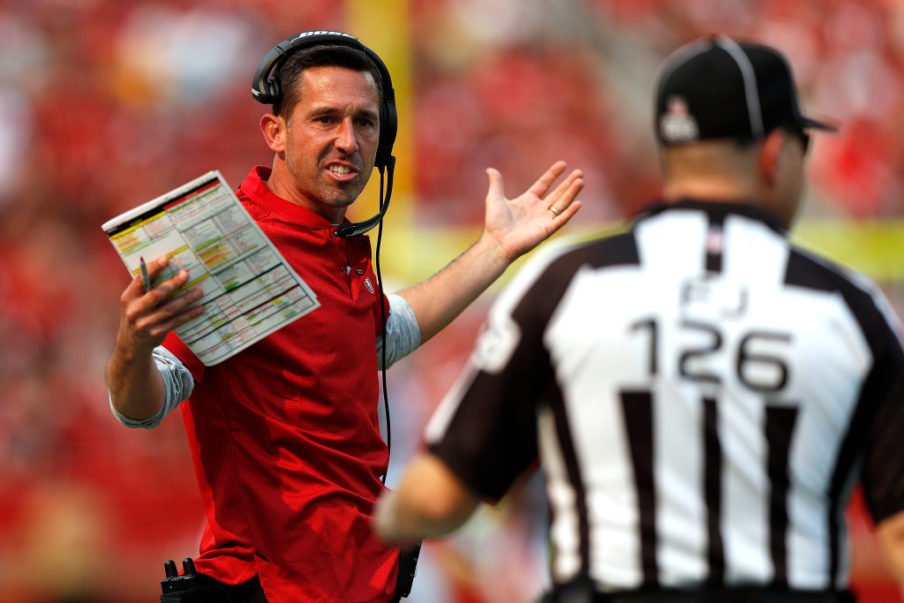 The bad luck began in preseason when the first string running back Jerick McKinnon suffered a season ending injury in practise. To make matters worse just three weeks later, the franchise quarterback Jimmy Garoppolo tore his ACL whilst mounting a comeback against the Chiefs in Arrowhead. The 49ers season was over in just three weeks.

Robert Saleh’s young defence took a step back and was historically bad against the pass, despite the acquisition of Richard Sherman, registering only two interceptions all season. Things were made worse by the off-field drama of sophomore standout middle linebacker Reuben Foster, who was begrudgingly cut in week eleven. Foster’s disappointing end in SF could be seen as a microcosm of the season.

However, it was not all bad. The athletic DT, DeForest Buckner finally broke out and racked up 12 sacks. Richard Sherman still played at an all-pro level, completely locking down the left-side of the field, only defending four passes all season. His veteran leadership to a young defence is also a vital asset for the Niners moving forward. And in Foster’s absence rookie linebacker Fred Warner stepped up and exceeded expectations. An agile off-the-ball linebacker with both on and off the field smarts can be everything Rueben Foster was not. 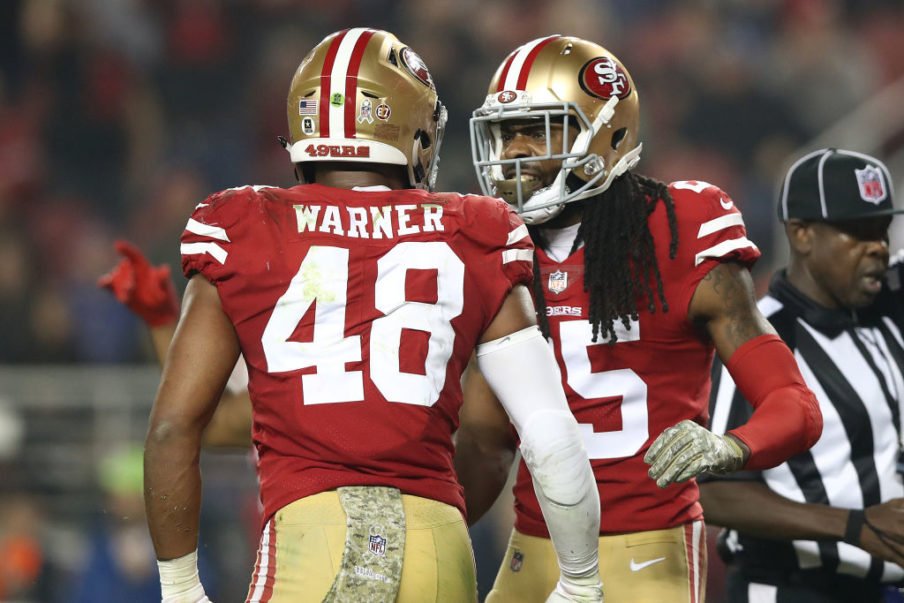 Despite his team’s record, this season proved how Kyle Shanahan is still one of, if not the best, offensive mind in the NFL today. The 49ers offence ranked above play-off teams such as Chicago, Dallas and Seattle. Shanahan accomplished this with a 2nd and then 3rd string QB, a 2nd string RB, a banged up offensive line and lacklustre wide receivers in Kendrick Bourne, Trent Taylor and Richie James. In some games due to injury the rookie Dante Pettis was named Wide Receiver number 1. Shanahan even turned practise squad QB Nick Mullens into a capable starter, finishing the year with 2,277 passing yards, 13 touchdowns and 10 interceptions on a depleted 49ers roster.

Anyone suggesting Shanahan be on the ‘hot seat’ after this season is unequivocally wrong. It may be too soon to break out the Bill Walsh comparisons but Shanahan is special.

Speaking of special, perhaps the brightest spot in the 49ers season was the emergence of George Kittle as the best TE in football. Kittle was drafted in the 5th round of the 2017 draft. After a standard rookie season, Kittle exploded in 2018 breaking the single season receiving yards record for tight ends amassing 1,377 yards and 5 touchdowns. 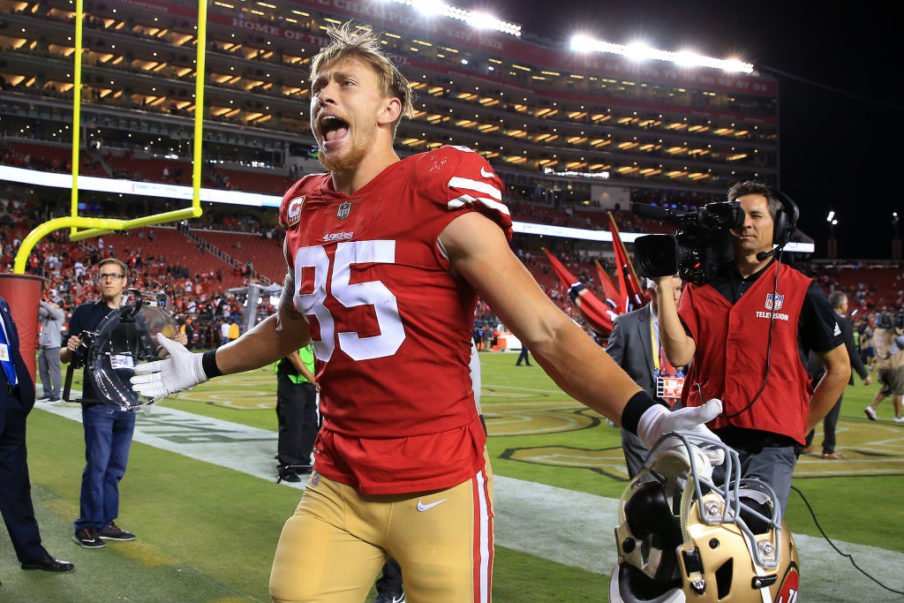 All in all, the 2018 season was a excruciatingly frustrating one for 49er fans filled with injuries and painfully close losses. Nevertheless, the season had some bright spots. Thumping the Oakland Raiders 34-3 in the final ‘Battle of the Bay’, as well as beating the Seahawks for the first time in five years in an overtime thriller in the rain. The rising stardom of DeForest Buckner, Fred Warner, Mike McGlinchey, Nick Mullens, Matt Breida and of course George Kittle.

The San Francisco 49ers don’t possess the aura of your typical 4-12 team. People are still excited about 49er football and the future looks bright.

I feel Richard Sherman best summed up the attitude surrounding the Niners heading into the 2019 season on his latest blog: “Just know I’m going to be ready to go in 2019 and I know the squad will be too.” 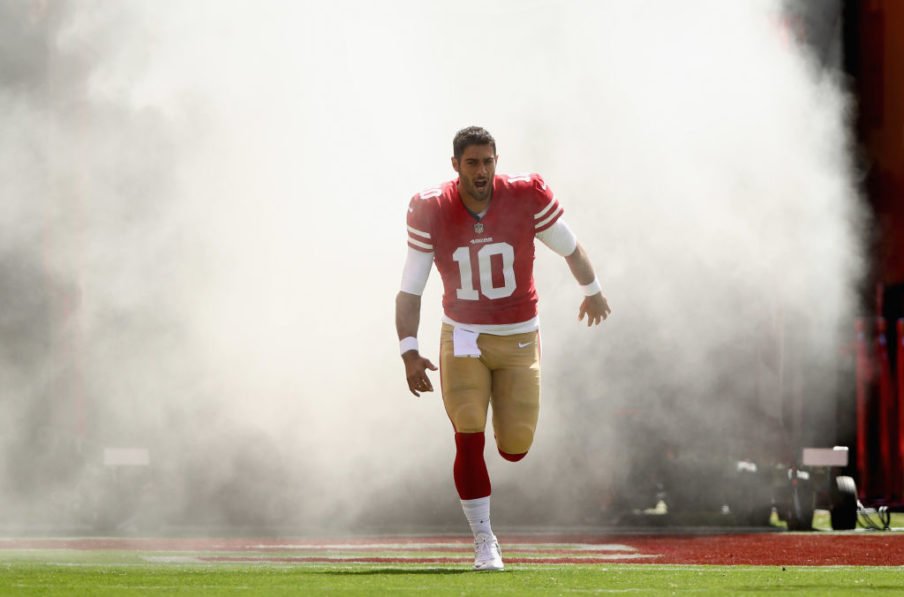