Perhaps it was never really a risk.

A risk implies the potential for failure. The opportunity for it to backfire.

Nick Saban pulling his 25-2 starting quarterback at halftime of a game he trailed by two possessions for a true freshman who had only played previously in mop-up duty for blowouts wasn’t him talking a risk. It was going for broke.

When Nick Saban called for an onside kick in the fourth quarter of a tied National Championship Game two years ago, that was gambling. The chance of giving Deshaun Watson the ball in plus territory with a chance to take the lead was reckless. It could have blown up in his face. But he ended up with the ball, the go ahead score, and the biggest possible payout from him putting all his chips in the center of the table.

Saban had no chance to re-evaluate his decision in Glendale two years ago. He made his bet, and it helped him gain his fifth championship. To win his sixth on Monday night in Atlanta, he had to make his bet over and over.

But in sticking with freshman Tua Tagovailoa, the risk morphed itself into the opposite. It altered itself from a move of sheer panic to another chapter in the legacy of the greatest coach in college football history. 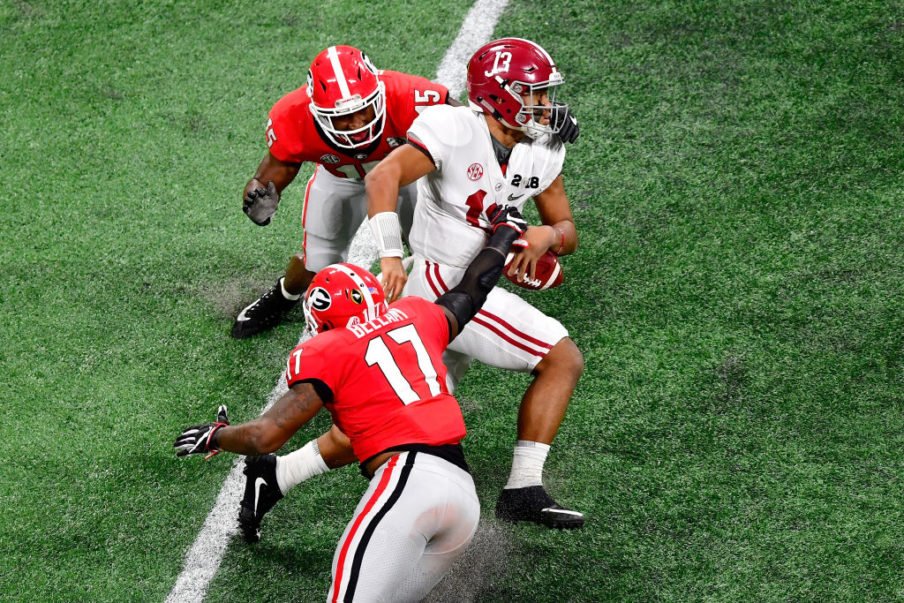 Alabama defeating Georgia 26-23 to capture their fifth National Championship in nine seasons was the perfect microcosm of everything Nick Saban has put together in his tenure in Tuscaloosa.

He frequently speaks about the process of winning. Execution, attention to detail, keeping the emotional side of the game in check, preparation, and continuing to play regardless of the situation are all components of the process. It wasn’t clicking in the opening 30 minutes though.

His team failed to take advantage of a Jake Fromm interception on the first possession of the game, and his offense was largely static. Starting quarterback Jalen Hurts showed some flashes, but on the whole, his team failed to do the little things right.

Kicker Andy Pappanastos appeared to give Alabama the first three points of the game, but a false start penalty wiped out his 35-yard field goal, only for him to miss from 40.

His team continued to lose the battle at the line of scrimmage, and an uncharacteristic substitution infraction helped aid a Georgia touchdown drive during the waning moments of the first half. Alabama left the gridiron stymied, trying to bust down a wall that wouldn’t budge. 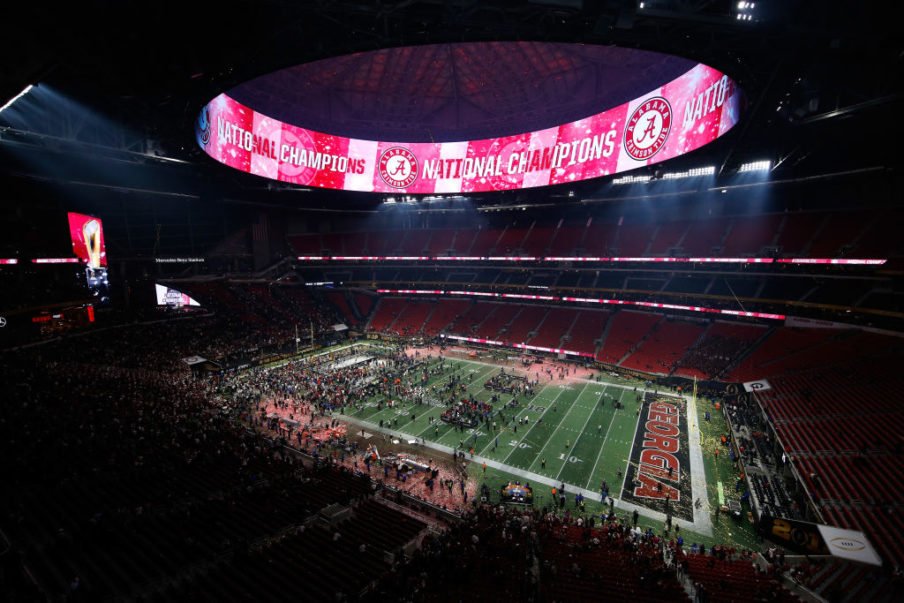 15 minutes of football later, Saban had every chance to make the switch back to Hurts at quarterback. Tagovailoa managed to put points on the board for Alabama to keep them in the game, but he also threw an ugly interception and had two possessions that lasted less than five plays and resulted in punts.

The Crimson Tide trailed 20-10 against a potent Georgia rushing attack with the ball, poised to run out the clock when the fourth started. When they got the ball back with 11:32 remaining, he exemplified his process with another bold move.
Prepare like the starter. Execute all week in practice in order to dominate during the game.

Another true freshman, Najee Harris, was inserted into the game as the lead back. Depending on who you ask, he’d be listed as Alabama’s third or fourth running back on the depth chart. The two-time high school All-American didn’t have a carry since November 18th against Mercer.

At this juncture in the game, Alabama needed some veteran leadership, but Saban doubled down on his Tagovailoa decision by injecting some fresh legs into his offense.

Harris ran for 64 yards on six carries, enough to help the Crimson Tide score points on back-to-back possessions to knot the clash at 20. 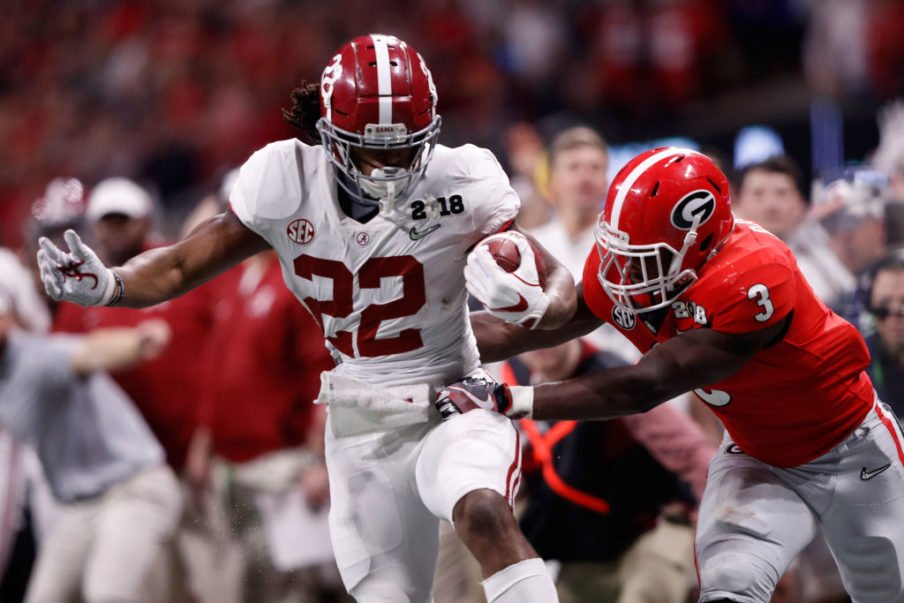 His process was shining through at the must crucial time of all. Slowly, Georgia started to wilt a little bit when the game started to tighten up. The playcalling from Jim Chaney started to take the form of some risks, persisting with gadget plays out of the wildcat formation in a misguided attempt to fool Alabama’s defense. The defense continued to play even though they trailed almost the entire game, and just executed one play at a time.

It all culminated with Tagovailoa dropping a perfect 41-yard touchdown pass into DeVonta Smith’s arms, the crowning moment of everything Nick Saban worked for all game.

It’s a very rare game when a team with a two-possession lead in the fourth quarter didn’t really blow the game. There are certainly aspects Georgia will want back, but that wasn’t the Bulldogs handing Alabama the National Championship. It was Alabama ripping it away. But in the calmest manner possible. 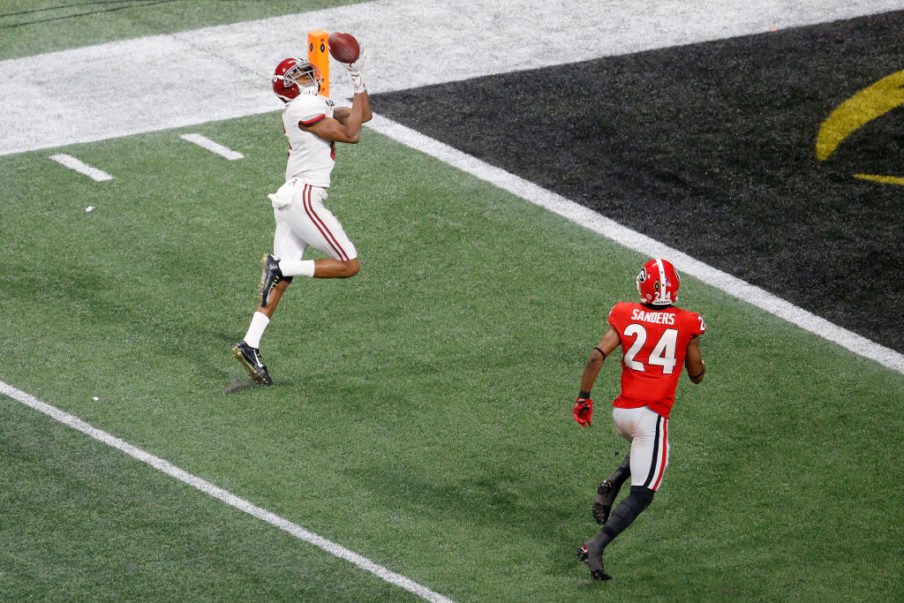 Nick Saban is now 12-0 against coaches who were once on his staff. He’s 12-1 in Atlanta with the Crimson Tide. He now has five National Championships with Alabama, and six total. The accolades go on forever.

But in all the coaching he has done and may do in the future, Nick Saban will never coach a finer game than the one he did against Georgia with everything on the line Monday night.